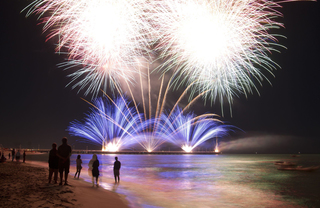 The countdown to New Year’s is officially in effect, and across the homes and apartments for rent in Honolulu, you can feel the anticipation building. Where will the biggest and best celebrations be located come New Year’s Eve and New Year’s Day? Where will you want to spend time with friends and family, or even flying solo when the clock ticks ever closer to midnight? That’s exactly what we’ll be taking a look at today, as we explore where you should go to welcome 2019 in Ewa Beach, Honolulu, and across the island.

If You’re in It for the Fireworks

Let’s take a second to break those down, shall we? The Waikiki Beach fireworks come courtesy of the Waikiki Improvement Association, and will be launched from, as indicated by the official announcement, “a barge just off Waikiki Beach.” It’ll be about eight to ten minutes of riveting light in the skies, with some of the displays mimicking fun shapes like “palm trees, rings, strobes, sparkling fans, colorful falling leaves, brocades and willows falling to the ocean.”

Meanwhile, over at the Hilton Hawaiian Village, the fireworks display will be a part of their New Year’s Eve Celebration Dinner Show. After a sumptuous 4-course dinner and a night of exciting live music from Manoa DNA and Dukes of Surf, they’ll set the skies above the lagoon alight with wonder in what will surely be quite the sight.

Finally, if you don’t mind making your way up to the North Shore, you’ll be able to catch the stylish New Year’s Eve spectacular at the Turtle Bay Resort. The fireworks are a private show available exclusively to New Year’s Eve event attendees, and they’ve also got a number of parties going on to supplement the fun as you roll into 2019. Speaking of which…

If You Want to Party Hard for the New Year

New Year’s parties will be in plentiful supply on December 31st, so you’ve got some choices to make on which you’ll want to go to, if you’re interested. We already mentioned there will be a few fine options available at the Turtle Beach Resort, which include:

The resort isn’t the only place you’ll be able to catch a NYE party, however. There’s plenty more going on right in Honolulu too. If you’re the nightclub type, you can check out either of the celebrations going down at The District Nightclub or Ginza.

The District Nightclub party will be kicking off at the Kapiolani Boulevard location starting at 10:00PM and will be going all the way until 4:00AM. You’ll need tickets for entry, and you might even want to consider some VIP reservations to secure a prime spot for the festivities.

Ginza, as you might already know, is located on Kona Street, and their “Special New Year’s Eve 2019 After Party” will start right after the midnight countdown, featuring booming bass beats from DJ’s Debin & Massfunk. It’ll be the perfect spot to dance the rest of the night away.

If you’re looking for a cool “themed” party to attend, there’s a black-tie casino night party going on at 53 By The Sea, Casino Night in Macau:

“Slip on your best black-tie attire for a night of crazy, rich extravagance featuring Casino Games, Live Music, a Cigar Lounge, Dancing, Raffle Prizes, and more! A limited number of VIP tickets are also available, which includes early entry and access to the second-floor VIP lounge.”

And if you’re interested in taking to the water for New Year’s, Oahu Boat Cruises is holding a “pre party” of sorts in the form of a dance cruise around 6:30PM on New Year’s Eve.

If You Just Want to Enjoy a Nice Dinner

Finally, if a well stocked buffet is more your thing, there are plenty of locations that will be offering such delights on New Year’s Eve, including a few favorites you may already be familiar with:

And of course, there’s one final option you’ll want to give consideration to come New Year’s Eve...

Especially when you call beautiful beach homes like Kapilina your home. That calming setting right near the ocean waters, the beautiful layout of every living space, and the fabulous feeling of community you get when you’re there all come together to make a fine place for celebrating any day, especially one where you’re gathered with the most cherished people in your life. If you’re ready to experience what it’s like living in island style, make sure you check out our availability today and inquire about making Kapilina your new home by the water’s edge.