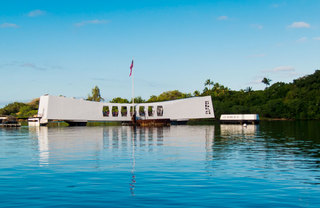 At first glance, you might think idyllic Hawaiian settings like the Kapolei housing are all about beachfront relaxing and fun in the sun. There’s definitely a large emphasis on convenience, comfort, and sublime seclusion along the sunny beaches here, but these distinct Oahu locations are also near an important piece of American history: Pearl Harbor. It’s significance during WWII is something that can’t be overstated, and to this day, while it remains an active military base, it’s also a place where those affected by the war (and their descendants) wish to make a sojourn to pay their respects and stand in awe of its historical relevance:

“To those who fought in the war, to those whose lives were affected by the war, their children, grandchildren, and each succeeding generation, Pearl Harbor is a place where people from far-flung corners of the world can come together in peace to honor the memory of the fallen and to celebrate the ultimate triumph of the human spirit.”

If you count yourself among the bunch, and you plan on making a trip to Pearl Harbor soon, you’ll want to gather as much information as possible in advance so that you can make the most of your trip, and today, we aim to help. We’ll be listing all those “must know” details for you right here. All you’ve got to do is read on, then block out some time in your schedule to get down to Pearl Harbor to see the sights.

Pearl Harbor is a naval base in Hawaii, on the island of Oahu. It’s the headquarters of the United States Pacific Fleet, and as of 2010, it merged with the US Air Force’s Hickam Air Force Base to form Joint Base Pearl-Harbor Hickam. Pearl Harbor itself, though, is perhaps best known for the historic attack that took place on December 7th, 1941, and was the catalyst for America’s entry into WWII:

“Just before 8 a.m. on that Sunday morning, hundreds of Japanese fighter planes descended on the base, where they managed to destroy or damage nearly 20 American naval vessels, including eight battleships, and over 300 airplanes. More than 2,400 Americans died in the attack, including civilians, and another 1,000 people were wounded.”

President Roosevelt asked Congress to declare war on Japan the very next day, and the rest, as they say, is history. Post-WWII, Pearl Harbor has remained a significant site (the HQ of the Pacific Fleet, remember?) and has also been declared a National Historic Landmark and added to the National Register of Historic Places. With such high honors under its belt, it makes sense that you’d want to tour the premises. When you arrive, you’ll notice there’s plenty to do and see, which we’ll cover next.

What to Do on Your Visit

Perhaps the most prominent attractions at Pearl Harbor are the four “historic sites” that dot the premises. These are:

The USS Arizona Memorial is a touching tribute to one of the battleships that wasbombed during the 1941 attack on Pearl Harbor:

“The Battleship USS Arizona was bombed on December 7, 1941, about 15 minutes into the Japanese attack on Pearl Harbor, killing 1,177 sailors and Marines. Over 900 could not be recovered from the ship and remain onboard. Today, Arizona rests where she fell, submerged in about 40 feet of water just off the coast of Ford Island.”

The memorial was built in 1962, honoring not only the crew of the USS Arizona, but the others who were killed during the attack — a “total of 2,341 sailors, soldiers, and Marines,” along with 49 civilians.

The USS Arizona Memorial is not the only you’ll find at Pearl Harbor, there’s also the Battleship Missouri, which was the last battleship commissioned by the United States Navy and, most famously, the site where the Japanese surrendered on September 2nd, 1945 (the end of WWII). There are two tours here daily, and plenty for you to explore upon the vessel should you decide to look around on your own.

Then there’s the USS Bowfin Submarine Museum & Park, which pays tribute the USS Bowfin, a fleet attack submarine that fought in the Pacific Theater during WWII, and earned the rather impressive nickname “Pearl Harbor Avenger.” It is permanently ported at Pearl Harbor, and free to explore during operating hours.

Lastly, the Pearl Harbor Aviation Museum, as the name suggests, has a collection of exhibits directly relation to aviation and Pearl Harbor itself. It occupies a site on Ford Island, and contains two hangars worth of historical artifacts that will surely catch your interest should you decide to check it out.

These sites in and of themselves are quite a bit to see, and it’s best not to rush:

“While it's possible to visit all four of the Pearl Harbor Historic Sites in roughly 6 hours, the best way to experience Pearl Harbor - and not miss a thing - is to make a full day of it.”

Getting Tickets and Planning Ahead

Pearl Harbor is one of the top three most heavily-visited tourist destinations in Hawaii, so it’s important for you to plan ahead to ensure you can make it there without any hassles. You’ll want to get your tickets in advance, and pay attention to the operation hours (and the weather) before you set out on your adventure. Both the National Park Service and Pearl Harbor Historic Sites have additional information that will help you make the most of your preparations, and guide in getting those passes.

Getting to Pearl Harbor From the Kapolei Housing

Getting to Pearl Harbor from lovely Oahu communities like the Kapilina Beach Homes is about as easy as “1, 2, 3.” It’s less than a thirty minute drive from beautiful Ewa Beach, and once you’re there, you’ll have the day to explore the sights and soak up all the history. Once you’re through, it’s back over to Iroquois Point for more relaxing at the magnificent beachfront homes of Kapilina. Living here, you’ll swear you’re at a resort, and the stylish residences (along with the fabulous amenities) go a long way to making the experience feel like every day is a vacation. Come see for yourself. Check out what Kapilina has to offer you, and make this your choice for fabulous living at a sunny, seaside Hawaiian paradise.