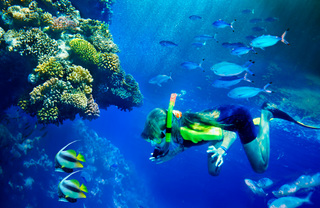 There’s no two ways about it — when you call the apartments for rent in Honolulu home, there’s a lot for you to be smiling about. This is a beautiful land, marked by all manner of fun things to do, amazing sights to see, and welcoming community to tie it all together. In the spirit of Thanksgiving, we’d like to highlight some of Honolulu’s finer features to put you in the mood for both festivity and camaraderie for the holidays.

If there’s one thing Honolulu definitely does not lack — it’s fun activities to find yourself involved with. As you might expect from an island paradise, many of these great things to do revolve around the beach and ocean. Sailing, for instance, is a longtime pastime for many Honolulu residents, and can take on a number of fun forms.

You could, for example, charter a cruise with any of the number of companies that exist in Honolulu. This is the way to go if you want to enjoy maximum comfort and relaxation while on the waters. Lounging about on the deck of a catamaran is a feeling that’s hard to top, and provides an excellent way to check out some of the islands sights as well.

If you want a bit more activity while out on the water, though, you can try engaging those muscles on a kayak instead. If you’ve got your own, just hit the water at a suitable beach and get to rowing. If not, you can always try renting a kayak from one of the island’s dealers, and might even consider a few classes to build up your skills.

And this is just sailing. There’s even more amazement in the water. Have you tried SCUBA or snorkeling? They’re some of the best ways to get a view of the world underneath the surface of the waves, and there are plenty of sites where you can see the teeming natural beauty of the Hawaiian islands.

Check out this list of tour operators if you need more convincing. They’ll be your ticket to checking out the waters of Hawaii in an up close and personal fashion, and depending on where you go, you just might see sights so incredible they’ll change your perception on the wonders of the natural world!

This is but the tip of the iceberg when it comes to having fun in Honolulu; there’s plenty more on the exhaustive list, but suffice to say, the multitude of activities you can engage in here is definitely something to be thankful for!

It’s important to stress that Honolulu is more than just pretty scenery to gawk at, though, that is a big part of the appeal. There are landmarks aplenty — both natural and manmade — for you to check out when you live here.

There’s famous 'Iolani Palace, for instance, on South King Street. Once the official residence for the royal rulers of the Kingdom of Hawaii, and later used as the capitol building, this truly unique structure features a style of architecture known as American Florentine — a mixture of features from the Italian Renaissance and distinctly Hawaiian elements — and is one of a kind in this regard:

“'Iolani Palace is the only building in the world constructed in the American Florentine style. Three different architects – Thomas J. Baker, Charles J. Wall, and Isaac Moore – worked on the palace with Baker's designs being the ones that were primarily used for the building.”

There’s no other building like ‘Iolani Palace, and many of the other landmarks around Honolulu share in having a sense of uniqueness about them, like Aloha Tower, the 10-story beacon guiding ships into the City of Honolulu at Honolulu Harbor. Other man-made landmarks around the city include the Hawaii State Capitol, the State Museum of Natural and Cultural History, the Museum of Art, and the Aviation Museum at Pearl Harbor.

Then there are the natural features of the area itself that are a joy to look at, places like Diamond Head, the volcanic tuff cone so prominently visible on the island of Oahu. It’s estimated to be about 200,000 years old, and has likely been inactive for 150,000 years. Still, it sits magnificently in the island’s backdrop, and a hike to the edge of this crater will provide views of the islands and ocean that are unavailable anywhere else.

Of course, any place worth living in and being thankful for has great people there. Kapilina and Honolulu are no exception, as this is a veritable people-person’s paradise:

“With its laid-back island vibe, diverse blend of cultures and ethnicities, and palm-lined business district that's just a short walk from the sea, Honolulu is regularly identified as one of the country's happiest places.”

That “laid back lifestyle” is one of the most attractive elements of Honolulu, and a large part of what makes this such an enriching place to live. Folks around here know that life isn’t all about work, and even when it is time to work, there’s no need to stress about it. By and large, island living makes for some cool customers around Kapilina and Honolulu, and if you’re of the same mind you’ll find you blend in with no troubles.

In a city of nearly one million people, there are plenty of new faces to see and interesting stories to hear. Most are pretty welcoming, and there’s little pressure to be anything but yourself around them. It’s an authentic and refreshing change of pace that just about anybody would be thankful for!

Live Life Like Nowhere Else at the Apartments in Honolulu

There’s a indescribable charm that comes with living in fabulous communities like Kapilina. Every day holds something new and exciting to discover, and with the combination of these beach homes’ lovely location and amazing residents, you’ve got more than your fair share to be thankful for here. Discover how you can call this luxurious landscape home — drop a line to learn more about the fine features that await you on the sands of Honolulu.