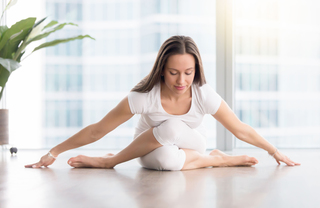 Thinking about getting into Vinyasa Yoga? Maybe you saw a demonstration online and found it intriguing, or hear you might be able to start some classes at Kapilina? Either way, you’ve caught the “yoga bug” and have a hankering to learn more.

And why not? Yoga, particularly Vinyasa, has some rather enviable health benefits. According to LIVESTRONG:

“Vinyasa yoga benefits that include increased flexibility, mental focus, cardiovascular conditioning, calorie-burn and muscle development. Check out a class next time you see it posted on your gym or studio schedule — it's well worth your time.”

So, if you’re ready to take that first step into making Vinyasa Yoga a regular part of your routine, read on, as we provide you with some of the background info you’ll need to get started.

What Is Vinyasa Yoga?

It’s quite possible you already have a passing knowledge about what yoga is, even if you’ve never tried it before. For those who might be unaware, though, yoga (in the broad sense) is a set of mental and physical exercises that originated in India about 5,000 years ago. Many yoga classes taught today are influenced, at least in part, by these earlier teachings:

“Yoga has become popular as a form of physical exercise based upon asanas (physical poses) to promote improved control of mind and body and to enhance well-being.”

Modern yoga takes on many different forms, one of which is Vinyasa. It’s an old Sanskrit word whose meaning is “to place in a special way.” The movements within Vinyasa follow this credo, as the style is characterized by continuous motion that is linked to the way you breathe. Very Well Fit explains:

“In Vinyasa Yoga, each movement is synchronized to a breath. The breath is given primacy, acting as an anchor as you move from one pose to the next.”

Vinyasa Yoga is also commonly referred to as “flow” yoga, because of the way the motions link from one to the next. It has received widespread acclaim as one of the most popular forms of modern yoga, one that even includes a few of its own individual subsets.

The popularity and acclaim that Vinyasa enjoys seems well-founded. According to instructor Nicole Markardt, it was even enough to sway her away from exclusively practicing Bikram Yoga:

“I grew to love, love, love Vinyasa! I went back to a Bikram class recently for the first time in over a year. While it has its place in my heart and I enjoyed it, it was not with the same passion that I once felt.”

The reasoning behind her conversion was multi-faceted, and she cites the elements of strength training, fusion of music into the classes, flowing movements, and spontaneity as clear factors in her switch from Bikram to Vinyasa.

While hers is one example out of many, it’s a powerful one, showing how Vinyasa presents itself as a great choice for anyone wishing to satisfy their curiosity on the benefits yoga can bestow.

Naturally, every class will have its individual quirks and eccentricities. Still, however, there are some similarities you may way notice between classes when you get started. The following is a hypothetical example of what you might expect upon incorporating Vinyasa Yoga into your routine. Courtesy of Do You Yoga, the beginner’s routine consists of fifteen poses:

While completing the routine, there are a few things you’ll want to bear in mind to help your practice go smoother.

The first is that this form of yoga is not dissimilar to dance, so staying loose, flexible, and mobile is highly recommended. Tight joints and an unwillingness to “flow” will run counter to the point of the entire exercise.

Secondly, bear in mind that balance is one of the keys to success. What you do on one side of the body, you should also try practicing on the other, but, be forgiving enough to yourself that you don’t become frustrated if you don’t get it right on the first try.

Third (and perhaps most important), make sure you learn from someone who you can build a good teacher-student connection with. Very Well Fit explains it best:

“In most cases, there is no single philosophy, rulebook, or sequence that teachers must follow, so there is a lot of room for individual personalities and quirks to come through. This makes it essential that you find a teacher you enjoy and can relate to.”

Even if that first class is a bit rocky, keep trying, and consider changing instructors down the line if you feel that there’s someone else who you might “click” with a bit better. Best of luck in your practice, and congratulations on making the effort to improve yourself through the art of yoga.

Yoga Classes at Kapilina Are a Great Way to Get Started

When you’re ready to start improving your yoga moves, there are few places more welcoming than the fitness rooms at Kapilina. In addition to having a state-of-the-art space to practice, you’ll get to do so against one of the most pristine backdrops available on the island. Just another one of the fine perks that makes living here about as close to perfect as you can get.